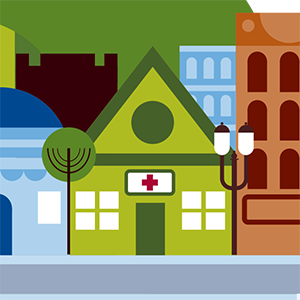 “Our major medical insurance was excellent, but I would just recommend that people have a supplemental policy in place for additional expenses.” ” Arlen Beckman

Arlen Beckman of Cedar Falls, Iowa, is a devoted husband, father of three and grandfather to seven. Now retired, Arlen still works occasional shifts as an independent contractor for the shipping business he started, now run by his son. Family is everything to Arlen. And, now that he is retired (well, semi-retired), he spends most of his time on his acreage with his grandchildren driving four-wheelers, snowmobiling and enjoying time together.

Outside of what he considered to be normal aches and pains due to old age, Arlen had a clean bill of health. In fact, he had never been admitted to the hospital before. One day, he experienced extreme indigestion that brought him to the emergency room.

“I thought it was just indigestion, and the doctor said, ‘No, you’re having a heart attack,’” Arlen said. “So, I was admitted right then and had stents put in. I was in the ICU for a day and then in the hospital for a day.”

Arlen’s wife Tonya served in the Iowa National Guard for 28 years. With Arlen working as an independent contractor, it made sense to utilize the health insurance offered by his wife’s employer. Like many independent contractors and small business owners, Arlen also felt it was important to have supplemental insurance to help offset the out-of-pocket costs associated with their major medical insurance.

Despite his short stay, Arlen’s total hospital bill for two nights in the hospital was over $50,000. While his major medical insurance covered the majority of the cost, Arlen was happy to have supplemental insurance coverage to help him cover his deductible and other out-of-pocket expenses.

Arlen was diligent about making sure that his insurance decisions made financial sense. He was able to discuss his existing insurance coverage with the Platinum representative that came to his home and determine what additional benefits a Platinum-marketed policy could provide him and his wife.

“I probably asked my Platinum representative questions that she didn’t have to answer, and she took the time to explain things and compare. It was great,” he said.

Now, thanks to his Platinum-marketed policy, Arlen is focusing on getting back to four-wheeling with his grandchildren.